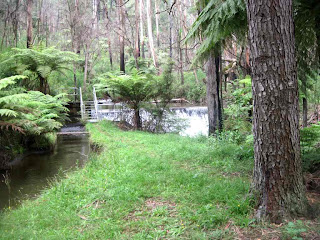 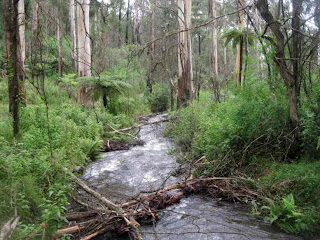 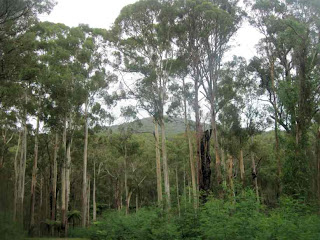 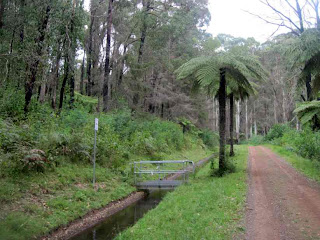 The Graceburn Weir and Aqueduct were built in 1892, and are part of Melbourn's water catchment and supply network. They are located east of Healesville, 80 km east of Melbourne.

Walkers are permitted to use the management track, 3 km return, which starts at the main gate at the Maroondah Highway and continues to the Weir.

The Weir and Aqueduct collect water originating from the valley between Mts Riddell and Juliet, which is then fed underground via a large iron pipe into the Maroondah Reservoir.

The Creswell pumping station is adjacent to the Aqueduct.

The Government proposes to close public access to the Weir, to minimise contamination by visitors, and to set up a new walking track in the area.

The Aqueduct Track is designated as "Road 14". It joins gated "Road 6", at the Weir viewing point.

Road 6 is one of many "no public access" management roads in the catchment area, which leads around the base of rugged Mt Riddell.

See all of the Photos, which included some archival images taken in 1906, for comparison purposes. In those years, a picnic area and facilities were located near the Weir - sections of this remained until 2007, but have now (2011) been removed. The early photos show visitors standing on the Weir infrastructure, but such access is no longer permitted.
Posted by Bob Padula at 7:41 AM