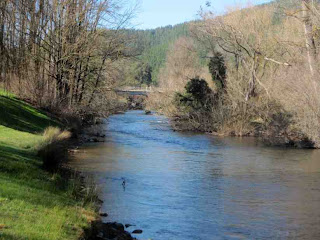 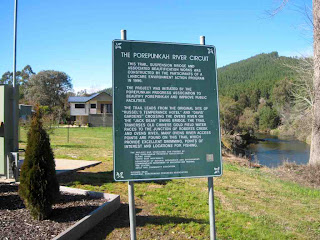 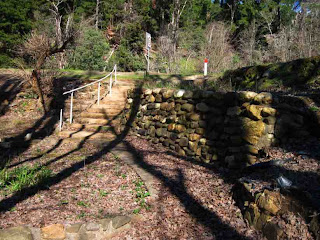 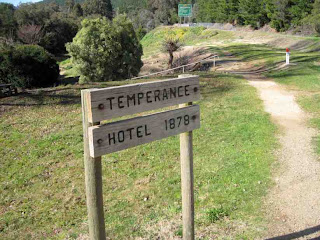 The town, located on the Ovens River, is in the foothills of Mt Buffalo, and was first settled in 1854, when gold was found in the area.

We followed the pleasant Riverside Circuit Walk, starting at the site of the former Russel's Temperance Hotel next to the Old Bridge.

The track took us through bushland alongside the river, past the site of the early Chinese gold-diggings, then across the Suspension Bridge at the former Davis' Gardens Crossing.

We reached Solly Lane, then Service St, following the Rail-Trail, which links Beechworth with Bright, and along this back to the start.

The Track was built in 1996 as a project of the Landcare Environment program.

Some of the foundations of the Hotel remain, with some stone paths - a picnic table is adjacent.

An Information Board at the Bridge describes the history and development of the area.

The Bridge was built in 1914, replacing an earlier rickety wooden structure, until its closure to vehicular traffic when the modern bridge was built downstream, past Riverside Park, as part of the Great Alpine Rd.

Interestingly, those old images were taken from approximately the same position spanning some 50 years.

Directly opposite the Bridge is the site of the former Olneys Bakery, which was hard up against the hill - a sign indicates its location.

General information about Porepunkah may be found at this website

The images of Mt Feathertop were taken on August 7 and 8, from the Great Alpine Rd, east of Bright, near the settlements of Smoko and Freeburgh.

See all of the Photos of our trip, which include some historical photos dating back to the 1880s, which show the original and newer bridges.
Posted by Bob Padula at 6:43 PM