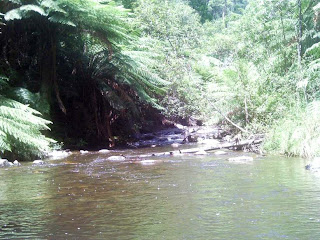 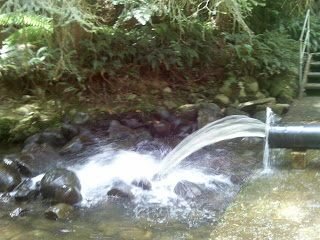 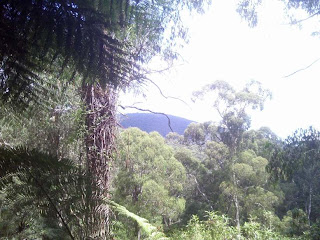 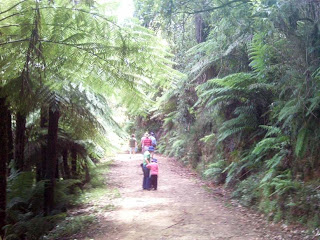 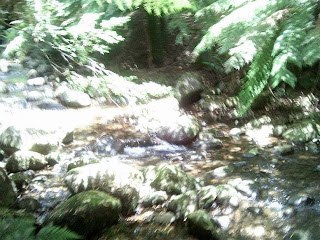 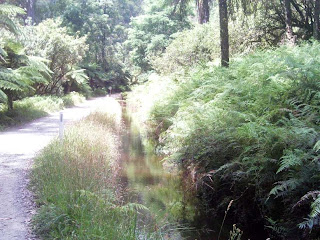 The Badger Weir Picnic Reserve is in the Yarra Ranges National Park, 7 km east of the town of Healesville, about 60 km from Melbourne.

Named Coranderrk after the local Aboriginal reserve, the Weir and pipeline system were officially opened in January 1909, and supplies water via the Corandeerk Aqueduct to the Silvan Reservoir.

Walking tracks pass through the forest, on both sides of the Badger Creek, reaching the Weir.

The original Weir was replaced by the current facility in 1929, upstream. Its remains may be inspected, just off the Lyrebird Track, partly covered by vegetation and detritus.

I visited the Reserve on Monday afternoon January 23, 2012, on a 3 km circuit hike which took me along the Lyrebird Track and Coranderrk Aqueduct Track.

Access to the Weir has recently been reopened to walkers, following a period of several months when it was closed to allow pipeline works to be completed.

In the picnic area, hordes of brightly colored parrots and cockatoos congregate, waiting for seeds!

The name "Badger" was introduced by the early settlers. One version is that they thought that the wombats were like English badgers. Another version suggests that the name was that of a horse, which had become bogged!

The Weir and its surrounds are listed in the Australian Heritage Database - comprehensive information about its history, construction and evolution is at

See all of t he Photos of my visit, and check out my YouTube video!
Posted by Bob Padula at 10:39 AM