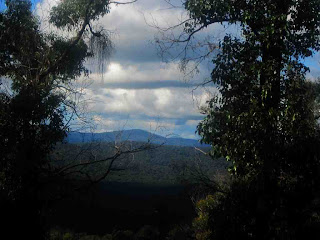 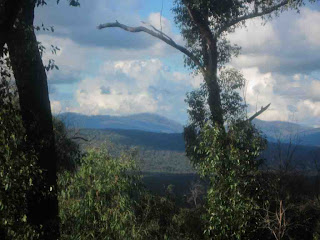 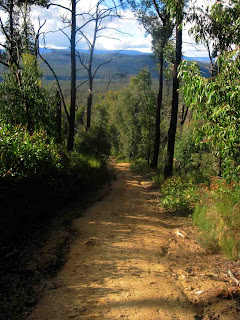 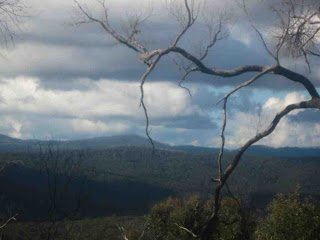 The winter day was cold, but sunny, and I climbed up to the Weatherhead Range Plateau.

The Park is very large,16,600 hectares. The area was used for logging from 1898 until 1990, and was turned into a state park two years later. The park is named after the Bunyip, an Aboriginal mythical creature.

The terrain in the park is mostly dense forest and swampy heathland, with Prickly Tea-Tree, Mountain Ash and Mealy Stringybark present.

The Weatherhead Range is in the southern section of the Park, and runs east-west, ending at Mt Towt in the east.

Public access to the Range is by foot, horse, or bicycle and it may be reached from the north or south.

I chose the northern approach, along gated Guide Track, which starts at the junction of Camp Rd, not far from the Gembrook-Tonimbuk Rd.

About 200 m from the gate is the entrance to the Buttongrass Reserve; a nice 3 km circuit track starts there, which I had completed previously.

I climbed Guide Track to its end at the junction with Lupton's Track, high up on the Plateau, where the Blackboy Range meets the Weatherhead Forest.

That was my turnabout point, at an elevation of 320m, one of the highest points in the Range!
I had ascended some 200m from my starting point.

The views from the Track were amazing, with magnificent panoramas across the Park and Diamond Creek valley to the north, towards the rugged Black State Range and prominent Mt Beenak.

This Track is very steep and sustained, with deep ruts caused by water run-off. I would not attempt this route immediately after heavy rain!

This area is somewhat remote and reasonable fitness is required.

Lupton's Track starts at the junction with the Tynong North to Gembrook Rd, and is an alternative route.

These tracks are kept open for fire management purposes, and care is needed to avoid horseriders and young hoons illegally using trailbikes.

The views, in my opinion, are the best in this section of the Park!

The distance trtavelled was about 5 km.

If you are lucky, you might even come across a Bunyip, which live in the forest!

See all of the Photos of this beautiful place!
Posted by Bob Padula at 2:13 PM