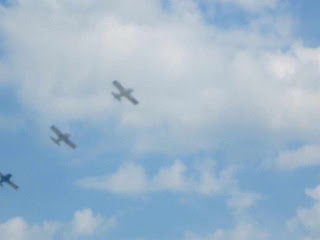 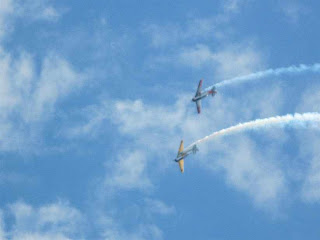 Those "Magnificent Men in their Flying Machines" put on a marvellous display at the Tyabb Airshow, at the Mornington Peninsula Airport, on Sunday April 18, 2010, before a crowd estimated to be around 50,000!

The theme of this year's Show was "A Century of Australian Aviation".

Tyabb is a town on the Mornington Peninsula, ahout 60 km south of Melbourne, near the Airport.

The Airshow was arramged by the Peninsula Aero Club - a flying training school and club based at the airport. It provides flight training for all licence levels from Private to Commercial available for both local and overseas students.

There was plenty of continuous action, starting at 11.30 am with a parachute drop, and scores of aircraft doing their thing, monoplanes, biplanes, fixed wing, helicopters, Vampire jet...

The Show finished around 4 pm.

All seven Australian based Mustangs are stationed at Tyabb.

Biggest and loudest were the Warbirds (Mustangs). These were all rebuilt aircraft. Engine noise was deafening! They put four up at the same time.

These Warbirds have V-18 engines, two rows of nine cylinders - 1600 HP! Their passes over the field were reaching 500 km/h.

The simulated bombing attack was very realistic, using two strafe planes and a rec/marker aircraft. Yes, lots of explosions ands red/white smoke, and the enemy was blown up, hiding in a forest!

Vampire came in very fast and very low, from an RAAF base elsewhere. Airstrip is not long enough to handle jets. There was another Vampire on display.

The Bleriot Monoplane replica was quaint!

The Aerobatic displays were pure excitement, with aircraft doing vertical climbs and "hanging" at the top, then diving vertically to level out at about 100 feet above the ground - no doubt the pilots knew what they were doing, unlike most of us on the ground!

Admission was $25 - public parking was in sporting grounds and open land nearby - mainly in the large paddocks near the footy ground - shuttle buses (free) took us to the Airport and back again.

I think I walked about 3 km looking at the displays and exhibits!

See all of my  Photos, as a selection of over 200 I took at the Show - aircraft on display - the actual three-cylinder ANZANI Arrowhead engine of 1908 used in the historical first powered flight in Adelaide in March 1910 - aerobatics - simulated attack raids - aircraft flying.

The Mornington Peninsula Airport was established in 1961 and it has operated continuously as a privately-owned airport since its establishment. It is located in Tyabb being bound by Stuart Road and Mornington-Tyabb Road.("the Airport"). The Airport is zoned 'Special Use 3 (Airport')' and has been subject to a number of planning permits with the current planning permit being issued in 1990.

There is an excellent slideshow produced by the PAC of 20 images of aircraft, based at the Airport, which flew at the Airshow, with high quality images and descriptions/history.

This is the link