Expedition to the Mt Taylor and Bullumwaal areas Gippsland 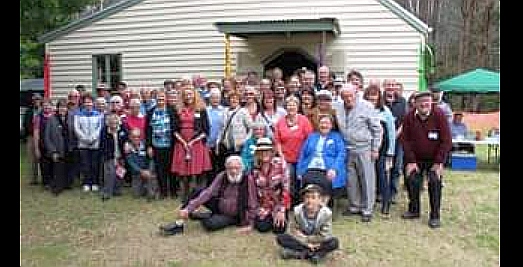 The Bullumwaal Blues
On a windy, blustery day on Saturday 5 November 2016.approximately 100 people braved the road to attend The Bullumwaal Muster. There were people with family connections to the place (names such as Websdale, Palling, Husted (Minter), Hall), people related to Ray Haynes, who wrote the book 'The Bulumwaal Blues' (his daughter Janice, the organiser, and his sister, Pat Stephenson and his niece Kaye), people associated with the Timber Mill (Robinson), 7 former students of the Bullumwaal school (Stinten, Smith x 5 brothers and sisters!!, Price), the Musicians Geoffrey and Faye, relatives and historians, local Bullumwaal residents and many others who just came for a sticky-beak, and to enjoy the BBQ and scones jam and cream at interval.
The famous 1895 Bullumwaal Curtain was displayed, and donations for its restoration collected, and there were photographic displays, as well as presentations on the history of Bullumwaal and the School, and community singing segments with songs sung at the Concerts held in the hall in the 1950's.
Such fun was had by everyone, that they all said they want to do it again soon - maybe in 2018??
"FOREVER BULLUMWAAL!!" (From the Bullumwaal Blues Facebook page)
My Visit
On Boxing Day 2021 I  did an exploratory visit to the Mt Taylor and Bullawaal regions, some 15km north of Bairnsdale, Victoria.
My route started at the  the town of Wyung, and followed the Bullumwaal Rd,. C603, to the junction  of Mt Lookout Rd, the site of the Mt Taylor Mountain Bike Park.
This is also known as the Mt Taylor Picnic area -  facilities available there support day visitors and overnight camping. A sign gives details of walking and cycling tracks which radiate out from the park.
The road winds its way through farmland and State forest, passing the Nicholson River.
There is a small settlement nearby named Mt Taylor, with a picnic area and infoboard and an old hall, dating back to the  gold rush days of the late 1890s and early 1900s..
Mt Taylor is one of four peaks in this mountain range, the others being Mt Bullumwall and Mt Baldhead
At the Summit of Mt Taylor is the high security no public access radio comms faciliy of Broadcast Australia and Telstra with several towers servicing Bairnsdale and nearby regions with TV ,mobile phones, commercial and government broadcasting. Access to the facility is off Tower Rd  which starts at Bullumwall Rd

The Mount Taylor Mountain Bike Tracks are located at the Mount Taylor Picnic Area, 15km north of Bairnsdale. Thereare three style of mountain bike tracks within the State forest, a Downhill track, All Mountain track and a Cross Country track.
Details and maps may be found at:
https://www.ffm.vic.gov.au/__data/assets/pdf_file/0023/26438/FS0038-Mt-Taylor-Mountain-Bike-Tracks.pdf

Bullumwaal, sometimes spelt Bulumwaal, is located along Boggy Creek, 29 km north of Bairnsdale in East Gippsland. Gold was found in Boggy Creek in 1857. There were soon 1000 people living there but the rush was shortlived. The discovery of reefs in the mid-1860s led to the establishment of a number of mines. A small township named Allanvale, later Boggy Creek, grew up at the creek crossing.

In 1868 there was a rush to Upper Boggy Creek where promising reefs were found. In 1870 this growing township was renamed Bullumwaal. Bullumwaal is an Aboriginal word thought to mean two spears, representing two nearby mountains, Mt Lookout and Mt Taylor. However, by the early 1880s the Boggy Creek goldfields again were almost deserted. 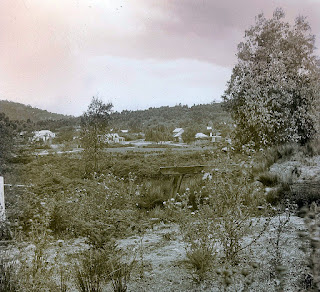 Bullumwaal's heyday was during the late 1880s and 1890s. The economic depression caused many unemployed to migrate to old goldfields. Many old mines were reopened and there were four quartz batteries in operation. Some mines were very productive, the best known being the Sons of Freedom and the Beehive. From 150 residents in 1890, the population swelled to 700 by 1896. The township was gazetted in 1898. Straggling over several kilometres it then possessed a post office, telephone service, hotel, school (1876-1972), church, mechanics' institute hall (1894), coffee palace, drapers, jeweller, grocer, other stores and a newspaper. Social activities were popular, with a cricket club, rifle club, brass band and dramatic company, and several lodges had established branches.
(Image shows the township c1890 from SLV)
Mt Baldhead 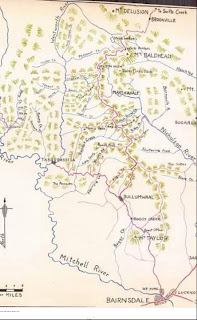 Nrth of Bullumwaal, the track becomes the Mt Baldy Track. I continued northeast along this route, so named because the summit is exposed rock, above the treeline.It’s tough rough, corrugated with transverse water runoff channels.There are marvellous views, with steep drops on  the west down to the river canyon below. This track  is suitable only for for 4WD vehicles and well developed navigational shills are mandatory. The area is crisscrossed with unsigned tracks uses for land management purposes. (The map is from SLV, drawn c1890 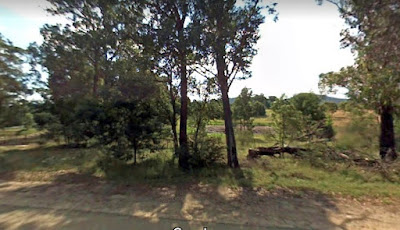 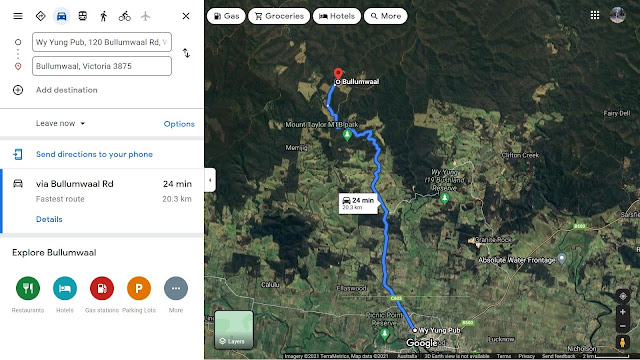 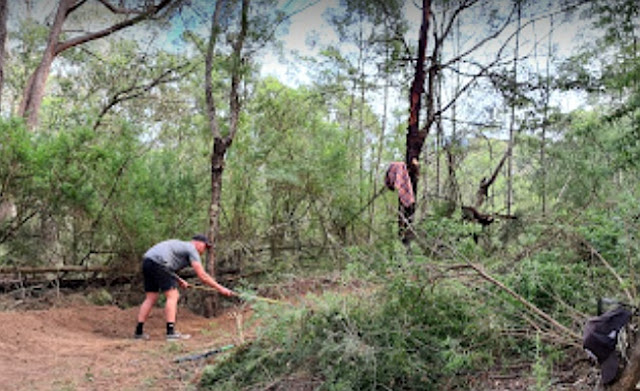 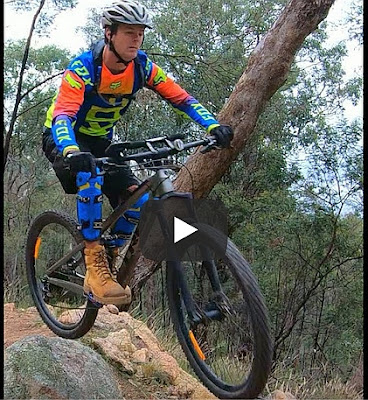