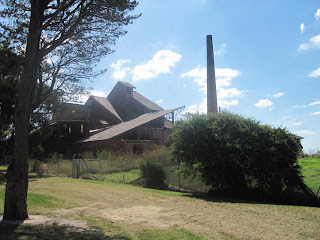 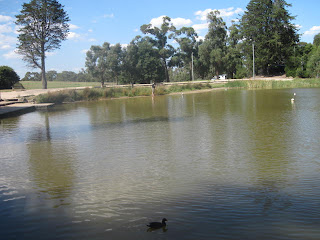 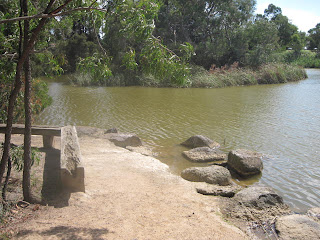 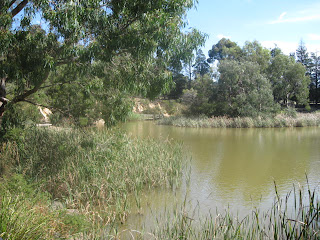 This album displays my photos taken on February 26, 2010, on an exploration of the Surrey Dive and the adjacent Heritage Brickworks, 15 km east of Melbourne town, in the Box Hill district.

In 1895 a market was opened near Box Hill railway station, which improved Box Hill's commercial importance. Box Hill was also the entry point for a tramline to Doncaster, which ran from 1889 to 1896. The 1890s also saw the opening of a gas works, several brickworks and a private girls' high school.

A site was bought by the Council from a brick works company in 1905, including a deep quarry from which clay had been taken. It became Surrey Park and the hole the Surrey Dive, a popular swimming hole, now an RC boat club.

The brickworks closed in 1988, and the quarry was filled in slowly. Much of the original tamping and grinding machines are still in place, though sadly smashed and graffitied by mindless fools.

In 1905 the newly formed Surrey Park Swimming Club petitioned the Council to purchase the former quarry site as a reserve. Surrey Dive became an official swimming pool with bathing sheds, springboards, and eventually a 10-lane course, making the Dive the first Olympic standard pool in Australia.

A ramp, springboard, a bathing shed and life buoys were purchased by Council. For many years Surrey Dive was the location of swimming carnivals watched by crowds of up to 3,000 people.

Swimming – for fun, fitness, or competition - has long been a popular activity amongst local residents. In the days before public swimming pools, the most well known swimming hole was the Surrey Dive.

The sheer cliffs and extraordinary depth of over 30 m attracted only the most experienced swimmers. The Surrey Park Swimming Club hosted regular swimming carnivals, the first of which was held in 1907 and featured a young Frank Beaurepaire, who won the one mile championship in record time.

After drought conditions forced the closure of Surrey Dive in 1967-68, the once popular swimming hole was converted into an ornamental lake.

While the experienced swimmers challenged themselves and others in Surrey Dive, there were few facilities for the young or inexperienced - despite repeated requests from the swimming club for improvements.

In the 1930s Ivy Weber, the first woman elected to Victorian Parliament and an advocate for health and fitness, organised a State Government grant to assist Council to build a new swimming pool at Box Hill.

The Box Hill City Baths, which were designed by City Engineer Frederick Kerr and featured tiles from the Australian Tesselated Tile Company, opened on 28 January 1939 in conjunction with the Australian Swimming Championships.

The Baths are adjacent to the Dive, and are now a heated outdoor facility, part of the Aqualink complex.

35,000 people went through the turnstiles in the first season and local schools were eager to use the Baths for swimming carnivals. The Surrey Park Swimming Club continued to use the facilities for training and competition and conducted learn to swim classes. Numbers peaked in the 1959-60 season when 105,000 came to the Baths.

The Brickworks site has been declared by the State Government as a Heritage Place.

The works opened in 1890, as the Box Hill Brick Company, but operations were suspended in 1892. In 1911 production restarted and in 1913 became the Standard Brick and Tile Co. Ltd.

In 1921, a 1 km railway line was built from the works to the sidings at Box Hill station. No trace of this line remains.

Surrey Dive and Aqualink is about ten monutes walk from my home here in Mont Albert and I regularly do laps in either the indoor or outdoor pools.