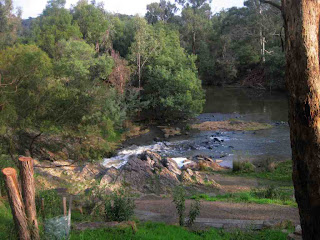 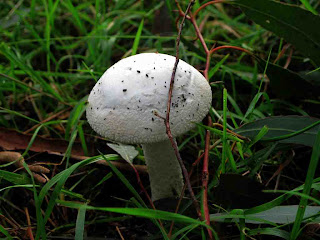 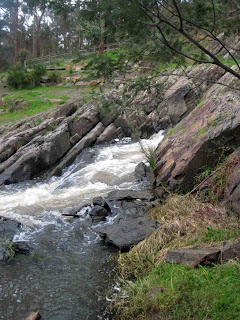 On Thursday afternoon July 8, 2010, I was in the Warrandyte State Park, 25 km east of Melbourne central.

From the main picnic ground at the Pound Bend Reserve, I followed the popular track to the Pound Bend Tunnel. From there, I continued westerly along a relatively unknown track, above the Yarra.

This track follows the hillslope at the rear of residential properties on Naughton's Rd.
On the opposite bank is the area known as Bob's Wetlands, which I visited some weeks ago.

The track ended at a secluded fishing spot, at the base of a fire management zone.

It was not possible to go any further, as the area became scrubby trackless bushland.

There were nice views of the Yarra and the Tunnel.

Some interesting birds and animals were spotted: ducks in the Yarra, a nice Kookaburra, and a large Eastern Grey Kangaroo. See the Photos of these creatures! There was also a very large white Fungus, and a beautiful family of scarlet Fungi (see photos).

The archival image was taken in 1932, showing gold workers at the Tunnel. This was created in 1870 by a goldmining company in order to divert the course of the Yarra River, thereby enabling the exploitation of the old riverbed. It is now a popular swimming spot.

There was a gentleman fishing at the end of the Track, but not catching much!

See all of the Photos of my visit!
Posted by Bob Padula at 8:38 AM