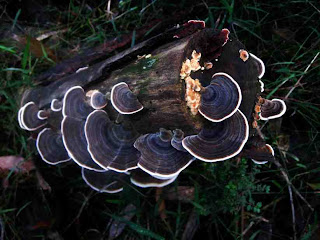 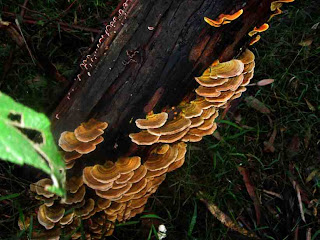 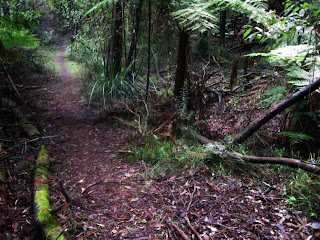 I went over to the Olinda State Forest, 40 km east of Melbourne central, on Monday afternoon July 19, 2010, a cold and bleak mid-winter's day.

I was amazed at the enormous diversity and variety of colored Fungi!

Leaving the car at the junction of Olinda Creek Rd and George's Track, I proceeded along this track, then on to unsigned Possum Track, decending into a gully.

The track crosses a dry tributory of the Lyrebird Creek at the bottom of this gully.

I then continued along Possum Track, reaching its end at Hermon's Track, my turnaround point.

Tht total distance was about 3 km, through beautiful fern gullies and tall timber.

The Olinda Forest was a logging region, from the early settlement in the 1850. It was originally known as the Olinda State Forest, prior to its amalgamation into the Dandenong Ranges National Park in 1997. Timber cutting ceased in 1968, when the Forest was declared a "recreational zone".

Serious bushfires ravaged the Forest in 1962 and 1968 - the charred stumps and logs remain.

See all of the Photos of my visit!
Posted by Bob Padula at 11:13 AM