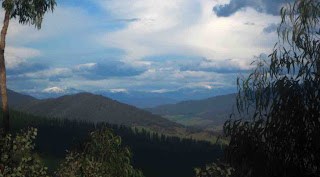 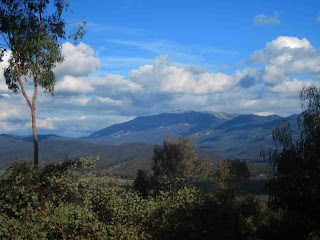 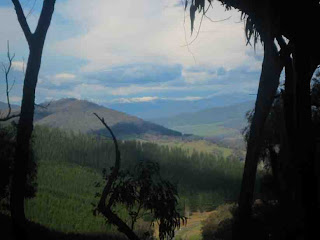 This article is an account of our visit to the Reform Hill, Myrtleford, 300 km NE of Melbourne, on Saturday August 7, 2010.

Reform Hill takes its name from a rich Gold Bearing Quartz Reef discovered in 1854. Trial crushings yielded a high proportion of gold, ten ounces to the ton. The gold bearing quartz was in places 7 metres wide and ran through the core of the hill.

This reef brought about the development of Myrtleford due to the long term nature of quartz reef gold mining and the area's location on a fertile valley. John Riley was allotted 100 yards of reef which became known as the Reform and from there the mine grew rapidly.

To crush the quartz stone, the Reform Battery was erected on the Banks of the Happy Valley Creek opposite the mine tunnel entrance, very near where the Old Butter Factory is today. The battery was powered by a water wheel about 5 metres in diameter and treated the stone of the district at a cost of 33 shillings per ton. It could crush about 19 tons of quartz per day, 24 hours per day, 6 days a week.

For over 30 years the Reform Mine was a principal employer within Myrtleford, with the miners paid around 2 pounds and 10 shillings a week, (about $5) in the mid 1880's. The mine closed in 1888 due mainly to a large amount of water entering the shafts. It is estimated that the mine produced around 21,500 ounces of gold, which at todays prices, would be worth around 20 mllion Dollars.

Features of this walk were the monument to Hume and Hovell, built in 1924 to celebrate their exploration in 1824, the the old reservoir, nice stands of Grass Trees, and the old (covered) ventilation shaft of the Reform Mine.

The Lookout is a cleared area with a Trig Point Marker and it can also be reached by car up a steep management road. There are spectacular views towards the Mt Buffalo Massif, the Victorian Alps, over the Myrtleford town, and west along the Ovens Valley.

We saw some eastern Grey Kangaroos and Rock Wallabies!

The bushland is known as the Reform Hill State Forest and is now mainly regrowth, as the original forest was cleared during the gold days for fuel and building materials.

The Battery was resited to its present location some years ago - the historical display includes an information board with photos.

See all of the Photos of our visit!
Posted by Bob Padula at 1:36 PM