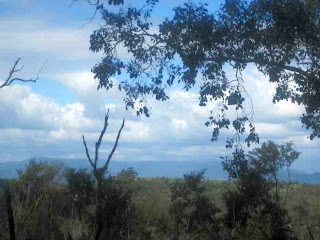 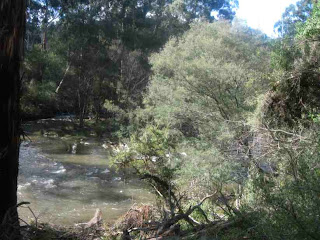 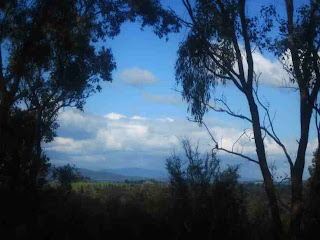 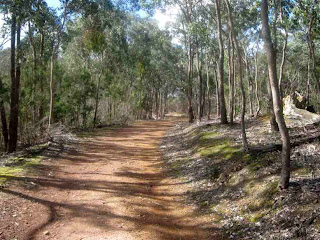 On Wednesday September 29, 2010, I visited the remote Yarra Brae Section of the Warrandyte State Park, 20 km east of the Melbourne CBD. I completed a 6 km return hike along the gated Market Garden and Lucerne Paddock Tracks, both being fire management tracks, starting and finishing at the Clifford Activity Centre, reached from Clifford Drive, off Jumping Creek Rd.

The State government purchased the Stane Brae and Yarra Brae river frontages in 1982 and both parcels of land were incorporated into the park in 1987.

This is one of the best long walks in the Park, following the ridge top, with excellent views easterly over the Yarra Gorge towards the Yarra Ranges, to the Dandsenong Ranges, and the Mt Lofty section of the Park.

Market Garden Track starts at the Clifford Activity Centre. Just north of signed Scout Track is a short side-track leading up to a large cleared summit space on a hilltop - there are good views from here to the Kinglake Ranges and hills around Kangaroo Ground, and across neighbouring farms, grazing properties, and equestrian centres.

Market Garden Track then descends to a large clearing next to the Yarra River, believed to be the site of an early farm. This is a Water Point for fire management purposes. Immediately opposite this point is the small municipality "Bend of Islands", an Environmental Living Zone.

This is the place where the concrete retaining wall was to be built across the Yarra, as part of the huge Yarra Brae Reservoir Project, announced in 1973. This was subsequently abandoned, due to community protests.

From this spot, a gate marks the start of unsigned Lucerne Paddock Track, which follows the river, until another large cleared area is reached. This is another Water Point for fire protection purposes. It is assumed that this was the original Lucerne Paddock.

Here there are the remains of an old building, now only concrete foundations and a crumbling concrete tank and roof tiles.

From there, it was a 3 km trudge back to the start, mindful that there is an increase in altitude fromn 50 m to 130 m!

The Track is also known as the "Bridle Track" and is popular with with horseriders.

This area was originally known as the Yarra Brae Farm, a huge pastoral holding of about 400 hectares, which is dated to the early 1920s. Most of this was bushland/forest, with about 8 km frontage to the Yarra River.

Large sections of this land were cleared in the 1920s and 1930s for timber, and the area was then opened up for agricultural purposes, mainly orchards and grazing.

In 1940, the property was auctioned, which by that time comprised about 250 Ha of grassland, and 150 ha of timber.

Now, the Yarra Brae Riding Centre occupies about 100 ha of the former Farmsite. The perimeter of the Centre adjoins Market Garden Track and Lucerne Paddock Track, now within the State Park.

See all of the Photos of my visit.
Posted by Bob Padula at 8:53 AM