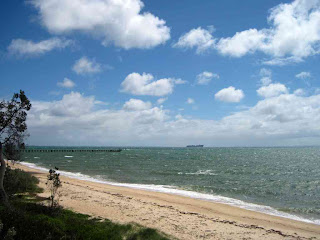 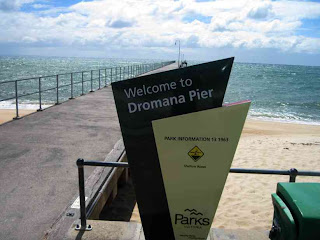 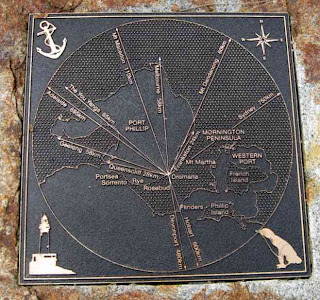 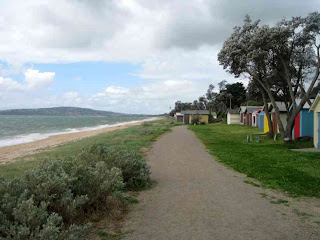 I visited Dromana on Saturday afternoon October 16, 2010, about 70 km by road from central Melbourne, on Port Phillip Bay.

It is believed that the name Dromana is of Irish origin and that it came about from the influx of gold prospectors in the late 1830s. In fact there is a Dromana on the tidal section of the Blackwater River, near Cappoquin, County Waterford in Ireland, and this is the most likely origin of the name.

In 1841, Hugh Jamieson purchased 5,120 acres (2,070 ha), or eight square miles, of land from the Crown for ₤1 an acre under the terms of the short-lived Special Survey regulations. The purchase included the northern part of the present suburb of Dromana to the east of Safety Beach. The area is known as Jamieson's Special Survey in cadastral surveys.

The first subdivision of Crown lands in Dromana occurred in 1854. Dromana Post Office opened on 12 April 1858. The completion of its pier took place in 1872, allowing the shipping of produce to the city markets. In 1881, Dromana was well established as a seaside resort.

A travel brochure of the time describes it as follows: "Sheltered from the untempered violence of the elements by the lofty ranges by which it is encircled, Dromana presents an air of homely comfort, singularly foreign to the majority of watering places." Dromana was proclaimed a town in February 1861.

Dromana's commercial centre is concentrated on Point Nepean Road, with Arthurs Seat and surrounding bushland providing a scenic backdrop. Across the road is an attractive foreshore with calm, sandy beaches, including designated camping areas.

Points of interest along the coast include the Dromana Pier, the rocky cutting at Anthonys Nose, and the Mornington Peninsula Visitor Information Centre.

The shared Bay Trail runs along the foreshore from Dromana to Whitecliffs (just past Rye).

I followed this Trail from its eastern starting point to quaintly-named Anthony's Nose, which is where the Arthur's Seat ridge meets the coast - the total distance was about 4 km (return).

There was a howling gale blowing, with very rough seas, and few visitors!

Paddle steamers are believed to have operated from the 1840s as settlement expanded and tourist resorts developed in the Port Phillip Bay area.......and a thriving industry survived until into the second world war. The removal of PS Weeroona for military duties for the US Navy brought an end to paddle steamer operations and although the paddler returned to Australia after the war she never resumed her earlier role and languished in Sydney harbour for five years before being scrapped.

The steamers called in at Dromana Pier, on their way from Port Melbourne to Mornington, Sorrento and Queenscliff.

See all of the Photos, including some historical images of the Bay Steamers  in the early 1900s!
Posted by Bob Padula at 9:57 AM