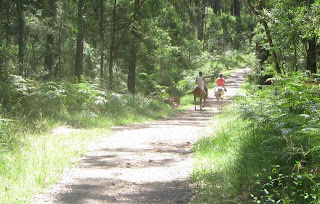 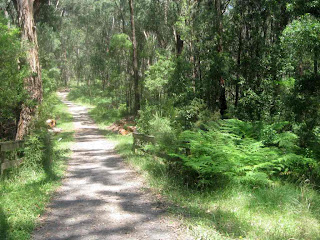 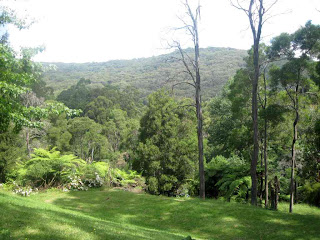 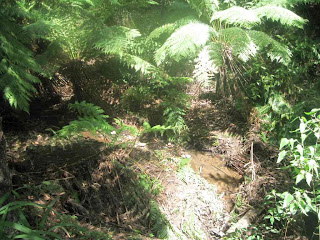 These pictures were taken during a 4 km bushwalking exploration on January 22, 2011, in the Doongalla Forest Reserve, a large (700 ha) area of superb preserved bushland in the Dandenong Ranges National Park, 40 km east of Melbourne.

Doongalla forest takes in the steep timbered western slopes of the Ranges, extending from Sassafras to Montrose, and is the centrepiece of Melbourne's view of the Dandenongs on a clear day.

The first European to set foot in the Dandenong Ranges was probably Daniel Bunce, a botanist who arrived in Melbourne in 1839. He was immediately attracted to the hills 40 km away on the horizon.

In that year he set out with a party of Aboriginal people to explore the area known as Corhanwarrabul, meaning the creek of the kangaroo.

The word Dandenong comes from an Aboriginal word of ancient origin "banyenong" meaning "a burning and the past".

Settlers began moving into the ranges during the 1860s and the vast extent of valuable timber resources quickly became apparent. Although proclaimed State Forest in 1867 the Victorian government bowed to pressure from settlers and opened the Dandenong Ranges for selection in 1878.

Doongalla - a place of peace...

Land in the Doongalla area was first selected in 1885. By 1908 Invermay, a grand home, plus stables and servants quarters, was built by Sir Matthew Davies on the 279 ha property. The house was later bought by Miss Helen Simson who renamed the property Doongalla meaning "place of peace".

Regrettably, a devastating bushfire swept through the forest in 1932 and destroyed all the buildings on the estate except the servants' quarters and stables.

The unburnt forest was logged by later owners until 1950 when the State government purchased the Doongalla estate, the first acquisition in a Buy back the Dandenongs program. The area was managed as Doongalla Forest Reserve prior to it becoming part of the National Park in 1987.

The Doongalla Homestead and Stables Site is an attractive setting for a picnic in spring when the rhododendrons are in bloom, or a cool retreat in summer.

The drier, more exposed slopes of the western face of the ranges support Long-leaved Box and Red Stringybark eucalypts, a community which is very rare in the area. Beneath the tall trees are the cypress-like Cherry Ballart, Dogwood, with its slender leaves and white flowers, and several other shrubs including the yellow and red flowering Rough Bush-pea.

Tall Mountain Ash trees thrive in the gullies along Dandenong Creek near the old homestead site. They tower over the crinkly leaved Hazel Pomaderris, Musk Daisy-bush and tree ferns.

My hike started at the Stables Picnic Ground, then along Stables Track, Bill's Track, Edgar's Track, Golf Course Track, Doongalla Rd, and back to base, following a circuit around the Dandenong Creek.

The day was very hot, well over 30 degrees!

Some of these tracks were originally pony trails.

The Forest is popular for bushwalking and horseriding.