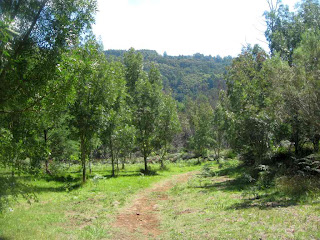 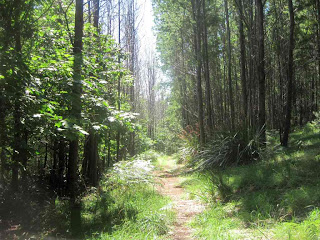 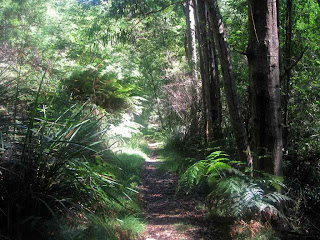 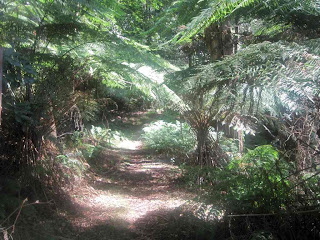 These pictures were taken on Monday February 14, 2011, in the RJ Hamer Forest Arboretum, Olinda, 40 km east of central Melbourne.

The 126 hectare Arboretum has plantings from the mid-1970s, and is adjacent to the Dandenong Ranges National Park.

My 4 km circuit hike started at the junction of Mathias and Silvan Rds, then along unsigned Poplar Track, on to the "Jungle" track through the Arboretum, reaching Red Dog Hut on Mathias Rd, and back to home base.

Large trees had fallen across the track!

Many of the tracks in the Arboretum are named after the tree species through which they pass.

The RJ Hamer Arboretum land is a small part of the original Dandenong and Woori Yallock State forest, proclaimed over 110 years ago. A succession of fires destroyed the original eucalypt forest and during 1948-1955, and softwood trees were planted on site as part of plans to improve Victoria's timber supplies.

The fires of 1962 destroyed the majority of these post-war plantings and the government then investigated the future use of the area. Plans were developed for the establishment of an exotic forest Arboretum to be used as part of a firebreak for the Olinda township. The RJ Hamer Arboretum is the first known occasion in which a forest style Arboretum was completely established by planting. A basic planting design was completed in 1970 and planting was carried out for the next 15 years.