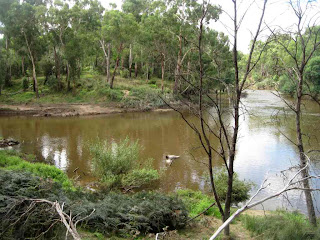 Tikalara Park is a large area of preserved land in the Yarra Valley Parklands, in the Templestowe municipality, 20 km NE of the Melbourne CBD.

The Main Yarra Trail passes through the Park.

I explored the Park on Wednesday afternoon March 2, 2011, which included a 5 km return hike along the Trail, starting at Webster's Rd, to a turnaround point near Petty's Orchard.

The historic Pontville Homestead is in the Park, but visitors are prohibited, as the surrounding land is occupied by grazing cattle.

Pontville Homestead was constructed in the 1840s on part of a large 1830s pastoral holding at the confluence of the Yarra Yarra River and the Mullum Mullum Creek by the pastoralist Major Charles Newman (1795-1866).

Newman claimed that he and his family were the first white settlers at Deep (or Mullum Mullum) Creek and at the time were the furthest settlers east of Melbourne. The remains of his first dwelling, a turf hut, have not yet been located but are most probably quite near the confluence of the creek and river.

Pontville now comprises a house constructed c.1843-50 and extended in the 1870s, remnant plantings, cottage foundations, outbuildings, bridge foundations, tracks, and a range of other features associated with the farming use of the area since the 1830s.

Pontville was acquired by the Melbourne & Metropolitan Board of Works in 1978, and Parks Victoria now manages the property as part of Paddle Reserve.

The photos show the Park, resident kangaroos, the Trail, other walkers, the Yarra, the Homstead area, and the Mullum Mullum Creek

Sadly, rabbits have invaded the park, and their burrows have impacted badly, particularly along the river bank. 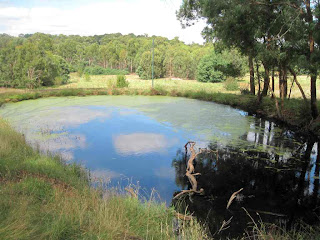 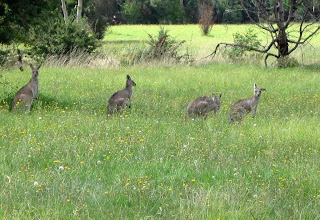 See the Video and the Side Show.
Posted by Bob Padula at 3:16 PM