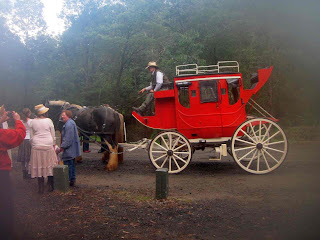 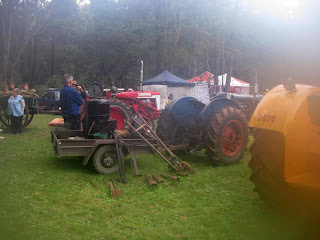 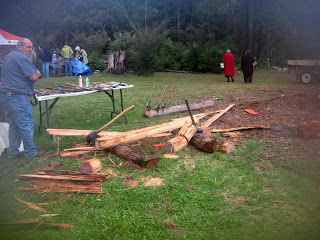 The annual Kurth Kiln Heritage Festival was held on Sunday April 11, 2011, at the Kurth Kiln Picnic Ground, near the corner of Beenak and Soldiers Roads, Gembrook, 65 km east of Melbourne.

A highlight of the events at the historic charcoal-producing kiln precinct was a recreation of an armed hold-up on a stagecoach.

The festival helps raise money for the preservation of the remains of the kiln, workers’ huts and associated buildings.

The kiln was built during World War II to make charcoal for use in gas-producer units fitted to motor cars. The units produced a combustible gas as a substitute for petrol, which was heavily rationed until hostilities ceased.

Festival spokeswoman Ursula Klink said in the Pakenham-Cardinia Leader that the friends group urgently needed money to restore and preserve what remained of the kiln.

“It was a key part of our wartime transport history. In many instances, gas producers on vehicles made the difference between being able to use them and leaving them in the garage,” Ms Klink said.

“The fuel was nowhere near as user-friendly as petrol and its use was discontinued almost as soon as alternatives were available. But in its day, it was quite valuable to a lot of people.”

The Gembrook Singers and the Weathered Heads Bluegrass Band weere among the entertainers. For the mechanically minded, there were historic and heritage machinery displays and lectures on the operation of gas producers.

Craft stalls, environmental displays and sheep shearing attracted many visitors and there were games and face painting for youngsters.

And for the energetic, there were bush walks in the 3500ha park!

Despite the rainy and bleak weather, everyone had a good time!

Enjoy my Candid Camera :Photos!
Posted by Bob Padula at 11:25 AM