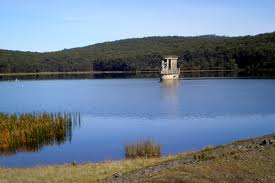 I am pleased to announce the publication of my "Silvan Reservoir Pictorial
Heritage 1880-2011" editorial research project.

This very comprehensive free on-line work may be viewed at:

BACKGROUND
The Silvan Reservoir precinct, some 65 km east of central Melbourne, has
always fascinated me! I first visited the area in the 1950s, by bike, and in
the decades which followed, I have made countless car trips to the area, as
a starting point for many interesting hikes in the adjacent Silvan and
Olinda Forests.

These forests have also supported my professional interest in radio
communications monitoring, due to the relative absence of power-line
interference.

In 2010, I came across rusting steel and concrete infrastructure, partly
hidden in bushland next to the overflow car-park. This fascinated me, and my
research indicated that it is the remains of the original Aerial Ropeway
system which carried materials from the Mt Evelyn railway siding 8 km to the
construction site.

SECOND RESERVOIR Proposal
In 2010, I also discovered considerable documentation about the proposal in
1933 to build a Second Reservoir nearby. This was abandoned due to community
concerns - it would have inundated most of the forest along the Lyrebird
Creek Gully.

PROJECT EVOLUTION
Mainly for my own interest, I decided to document my research and findings
about the history and development of the Reservoir. Indeed, a lot of this is
readily available in fragmentary form in various old print publications and
monograms, on the Internet, and hidden away in historical societies.

The digitisation of old newspapers has opened up a huge new world for
heritage research, and I have used material gleaned from the Argus and Age
newspapers of the time.

I have brought together what I believe to be the salient points in a
chronological time sequence, accompanied by images, maps, explanations,
narratives, and a video.

Rather than allow my research work to be hidden from the outside world, I
decided to publish it on-line.

It is also held privately in digital media for future use!

I hope you find the Project informative and useful.

Your reactions and feedback would be appreciated!