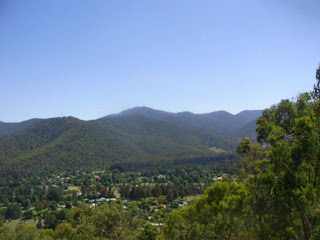 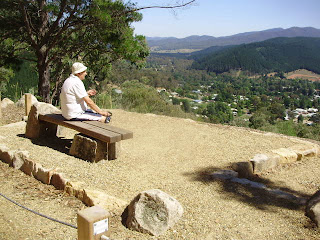 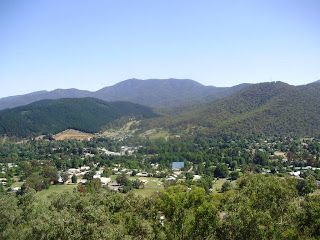 The township of Bright is 350 km NE of Melbourne, and known as the gateway to the Alps.

The Viewpoint overlooks the town towards Apex Hill and Mt Porepunkah.

My first visit to the Lookout was in December 1975!

Access is via Huggins Rd, about 5 km, starting at the main street of Bright, and signed.

An alternative route is via Brown Lane, at the eastern end of the town, starting at the Wandiligong Rd.

Energetic souls may wish to follow the signed foot-track, which starts at the end of Deacon Lane, near the Stadium.

Huggins Rd was constructed in the early 1920s, to support the pine plantation industry.

In 1961 I visited Bright, but didn't go to the Lookout. We went to the Bright Car Racing Track, just off the Great Alpine Rd, and watched the proceedings. The Racetrack is long gone, now buried in thick pine plantations. Its legacy lingers through Racecourse Rd, which is reached from the Great Alpine Rd, at the eastern end of the town.

See the full set of Photos of our visit, which include some historical images from various sources showing Bright from 1873, and some pix of the Lookout which I took in 1975, as well as one from my brother of 1960.! My photo of the Car Races of December 1961 is included - some good-looking cars there on that day!

Some pix of nearby Wandiligong have been included of Dec 14, 2009.