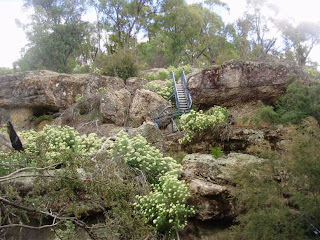 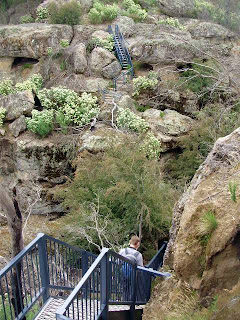 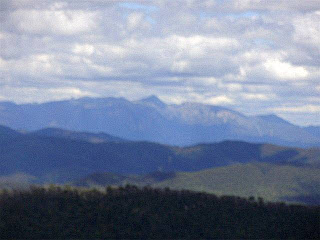 With mate Mick, the journey was from Bright, through Myrtleford to Whitfield, then up to the Reserve.

This scenic reserve provides marvellous vistas of the Upper King Valley and the Alpine National Park.

An Information Board at the car park/picnic area provides comprehensive details about the Reserve, its history and geological formation.

This lookout, high on a ridge overlooking the King River Valley, was well used in the 1800's by Harry Power, a notorious bushranger who would watch from this lofty position to see when the mail coaches were coming and wait in ambush. From his vantage point high up, he could spot the dust risiing in the far end of the valley to the north. This would give him time to ride his horse down from the ridge to meet the unsuspecting driver of the coach, which usually carried money too.

There are two viewing points - one is at the car park, the other is at the most northern point of the rocky outcrop, reached by a 1 km (return) walking track via a series of steep ladders.

The rocky outcrops were once part of an ancient river system. Over the years, movement in the earth's crust has uplifted the conglomerate from the drainage basin where it was originally deposited. Tilting of the sediment layers and erosion by wind and water has left the rocky outcrop of Power's Lookout as it is today.

The views are magnificent!

We visited the Lookout reserve on Saturday December 11, 2009.

See the full set of Photos of our visit!