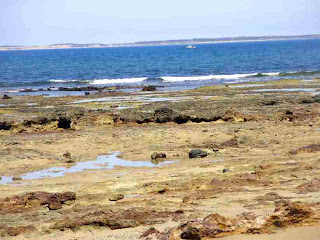 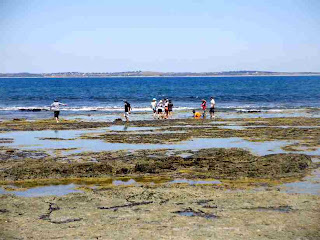 On Wednesday afternoon December 2, 2009, I went down to the Point Leo Coast, Westerport Bay, about 80 km south of Melbourne.

It was a warm day, the tide was out, and the vast reefs were exposed.

From the main car park at the end of Pt Leo Rd, I explored the reefs, doing a 2 km beach walk which took me to the jetty at the Pt Leo Yacht Club, then back to a point half way to Shoreham.

There was plenty of action along the beach, including a group of young students from the Balnarring Primary School on a nature-study excursion, a class of teenagers being instructed in the skills of canoeing, and people swimming, suntanning, beachcombing, and rockpooling.

This beautiful beach has a particular fascination for me. My first visit to the beach was on January 12, 1952, as a 12 year old. I walked along it from Shoreham, as an excursion organized by the YMCA at Camp Buxton, part of a ten day camp for disadvantaged schoolboys from low socio-economic environments.

See all of the Photos of my visit, which includes a picture which I took on that day some 57 years ago, at the same place, showing one of our Camp Leaders being photographed by my tent-mate.

The beach still looks much the same!