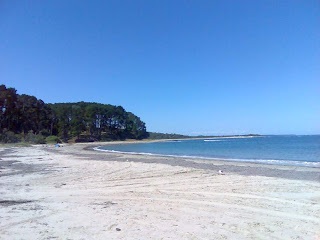 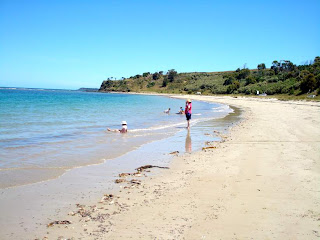 On Tuesday December 22, 2009, I went down to Shoreham Beach, on Westernport Bay, about 70 km south of Melbourne.

From the main car park car park next to the beach, I explored the coast to the east as far as the reefs at Honeysuckle Point, crossing the Stony Creek estuary, on a 4 km beach hike.

One of my objectives was to locate the site of the former jetty, which was dismantled in the 1940s.

In those years, Shoreham Beach was a vibrant seaport, where boats would load produce from the local farms, and unload provisions.

The advent of good roads, and the nearby railway from Bittern to Red Hill, put an end to the sea transport.

Nothing remains of the jetty - the location is now the small boat unloading/loading ramp. An aerial view via Google Earth shows the outline of the jetty foundations.

See all of the Photos of my visit!
Posted by Bob Padula at 9:43 AM