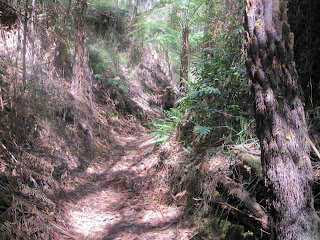 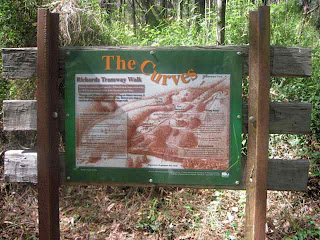 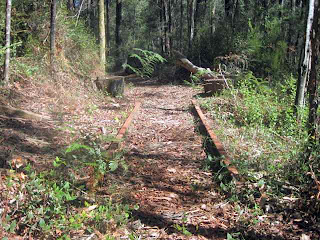 The Trail, (5 km return), starts past the small settlement of Big Pat's Creek, 100 km east of Melbourne, deep in the Yarra State Forest.

The Tramway was opened in 1916 - it closed down in 1951, and serviced several mills in the region.

Sadly, the wooden Log Landing/crossing at the restored section which once had the original winch cable coming down from the hill has deteriorated and is now buried in vegetation.

See all of the Photos of my visit, which includes a photo I took on my previous visit in September 2005, showing the winch cable and the sloping wooden Log Landing.

There's also a picture taken in 1916 at the same site!

It served several mills in the forest, with logs carted by horses or locos on steel and/or wooden rails to the railhead at Warburton.,

Sections of the Tramway Trail were restored in 2003 by DSE and local residents of Big Pat's Creek.