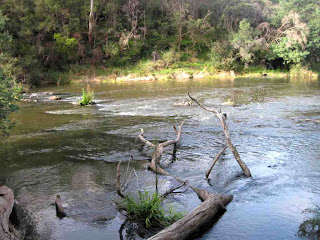 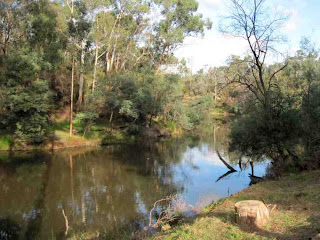 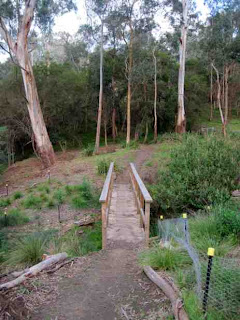 These photos were taken on June 1, 2010, along the north bank of the Yarra, Warrandyte North, Warrandyte State Park, 25 km east of Melbourne town.

The unsigned and un-named foot-track extends for about 2 km from the junction of Koornong Crescent to Osborne Rd.

It follows the Yarra through bushland, passing farms, rapids, and ducks, and is managed by a Landcare group in conjunction with the Nillumbik Shire.

The track is steep and stony in places, with nice river views to the opposite bank, and across to the Jumping Creek Reserve.

Rustic wooden seats have been placed at several observation points.

A footbridge is crossed near the start.

See all of the Photos of my visit, whjich inclide some archival images of around 1900-1910 of the former Warrandyte Bridge, which was built in 1875 and replaced in 1955. The old bridge was about 500m downstream from the present structure.
Posted by Bob Padula at 3:10 PM