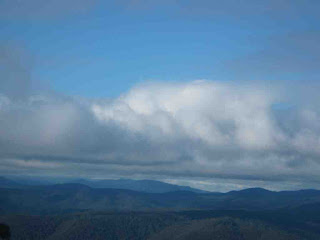 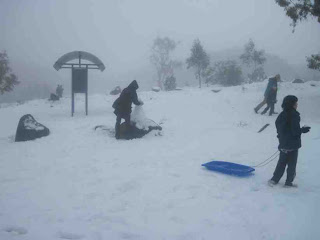 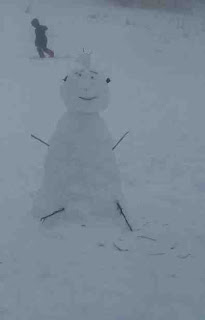 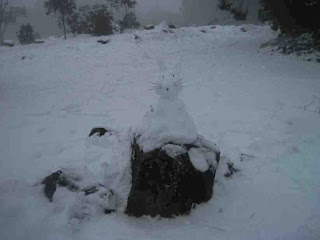 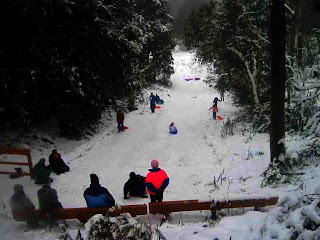 At 1280 m above sea level, this mountain is the closest peak to Melbourne where good snowfalls occur during winter.

The road was closed at the main car park - to reach the summit is about 1 km further up. The summit road past the carpark was starting to freeze, as the temperature had droppped to zero degrees by noon.

There was about 20 cm of snow at the summit, with lots of interesting snowmen being built, and toboggans everywhere!

Unfortuately, there was heavy fog and mist around the summit, obscuring the Alpine views.

This was the first day of free admission to Mt Donna Buang, as a consequece of a decision by the Victorian Goovernment to abolish entry fees to State and Regional Parks across the State.

To mark the occasion, Parks Victoria had provided free hot food and drinks for all visitors on this day, served from a commercial Hot Food Van which had come up from Warburton!

There is no cross country or downhill skiing at Donna Buang. In winter, the resort offers snowplay, sightseeing, and tobogganning. The walking tracks at the summit to Mt Boobyalla, Dom Dom Saddle, Acheron Gap, Mt Victoria and Ten Mile picnic ground are often buried under winter snow. The Dom Dom Saddle track is signed as "no entry during the snow season".

Until the late 1930s, there was a ski village at Donna Buang, near the present day main car park, and downhill skiing was popular, but this was almost totally destroyed in the Black Friday bushfires in 1939. What remained was dismantled and rebuilt at other snow centres, such as Mt Buller.

The Donna Buang Rd was built in the 1920s, and members of the newly formed Melbourne University Ski Club, formed in 1929, visited the region often.

The downhill ski-run was subsequently closed down and became the present-day toboggan run.

The lookout tower is the third generation - the first was a wooden structure built in the 1920s - this was replaced around 1940, itself later replaced by the present steel tower.

There are good signed lookout points on the Donna Buang Rd on the way up, past the Acheron Way turnoff, offering panoramas across the Yarra Valley and Wwrburton. (see photos).

See all of the Photos of my trip, which include some black and white historical images, from year 1940, for comparison purposes!
Posted by Bob Padula at 10:34 AM