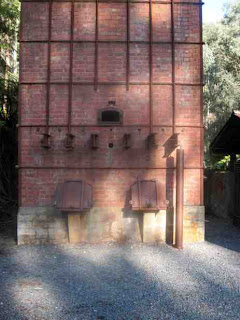 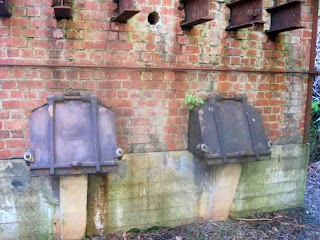 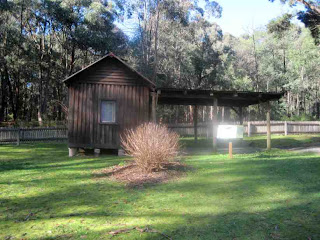 On Monday afternoon July 12, 2010 I visited the Kurth Kiln Park, 10 km north of the town of Gembrook.

The following information is acknowledged to the Kurth Kiln Friends Website:

The Park is named after Ernest E. Kurth, a Doctor of Chemistry at the time at the University of Hobart, who in 1940 was investigating alternate sources of motor fuel (such as shale and wood) for the eventuality that Australia could become cut off from the supply of overseas petrol.

Kurth soon realised that mineral shale oil, while theoretically possible, would of needs be a huge project, a complete new industry, needing massive funding, whereas charcoal production was already well established and the principle of wood-gas generation for motor vehicles universally known.

So he concentrated his efforts on ways to produce charcoal in the quantities required for such an application. He came up with a revolutionary new design for a continuous operation charcoal kiln, a vertical structure where new wood was added at the top and charcoal was extracted at the bottom; none stop, twenty-four hours a day, seven days a week.

The temperature of the charring process, besides being regulated with air vents, was carefully controlled by water, reticulated in a series of pipes through the hot charcoal.

Kurth's patented design won Federal Government approval and in 1941 he received funding for a full-scale production model. He chose the present location, some 10km north of Gembrook, where waste wood left over from the 1939 bushfires was plentiful.

In a trial production run starting 18 March 1942 some 500 tons of charcoal were produced by August that year; three tons every 24 hours from 21 tons of wood, the loading capacity of the kiln.

The process proved to be faster, less labour intensive than any conventional method, was 15% more efficient in yield and produced consistent high quality charcoal, free from contamination. The charcoal was graded and bagged on site before being shipped to distribution points in Melbourne.

Statistics show that some 60,000 vehicles were fitted with the so-called charcoal Gas Producers during the war years to give industry and the public the mobility to live with petrol rationing.

In February 1946 the kiln was de-commissioned and the Forestry Commission Victoria started using the site as a base camp for its forest management activities. Some 18 huts were purchased from the Army and used to accommodate the workforce, at times up to 100 men.

In 1982, after the FCV had moved out, Kurth Kiln was developed as a Picnic Ground. Material left over, after a fire destroyed most of the huts, was used to create a Caretakers Residence compound, where visitors now can see some of the historic settings and cultural artefacts from the period. The kiln itself, a monumental 10m high red brick and steel structure has, together with its associated sheds, become a landmark at the centre of the 3,500ha Kurth Kiln Park.

Although no precise figures are available it is predicted that some 10,000 visitors come to Kurth Kiln annually.

See all of the Photos of my visit!
Posted by Bob Padula at 6:53 PM