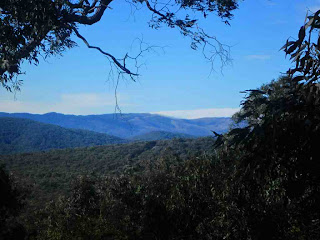 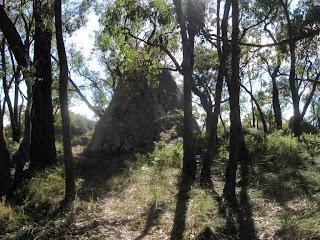 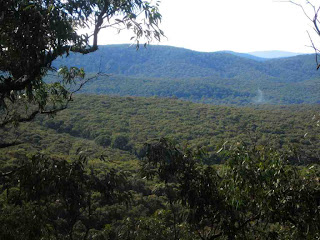 On Saturday afternoon August 14, 2010, I went out to the Bunyip State Park, 65 km east of Melbourne.

I visited the remarkable Pyramid Rock, high up in the southwest section of the Park.

It is reached from the Tynong North to Gembrook Rd, then up Pooley Rd (a steep rutted dry-weather 4WD road) to the southern end of gated Sandpit Ridge Track.

Then, a 4 km return hike up Sandpit Ridge Track, reaching the unsigned Pyramid Rock foot-track. This led up to the summit of the Ridge, where Pyramid Rock stood like a sentinel!

This granite rock is about 3 m high, and is surrounded by many other smaller rocks.

There are excellent views from the base of the Rock, north across the Park and the Cannibal Creek Gully to the Black Snake Range.

After exploring the Rock and, I continued along Sandpit Ridge Track to my turnabout point at the junction of Cannibal Creek Track.

The area off Pooley Rd was originally used for sand extraction. It is now fenced off for environmental protection. The remains of old sand pits may be found across the Park, now undergoing revegetation by Parks Victoria.

Millions of years ago, much of the Park was under the sea - the sandy ridges are remnants of those times.

This hike was excellent, with glorious views from various vantage points along the ridge line.

This forest was logged in the early days and has been ravaged by bushfires on several occasions.

See all of the Photos of my visit!
Posted by Bob Padula at 12:45 PM