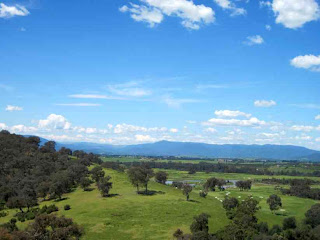 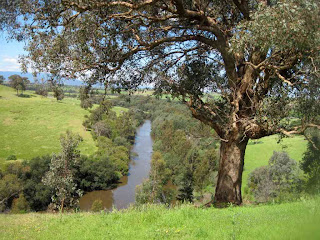 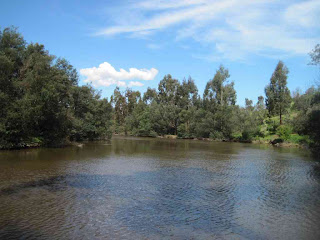 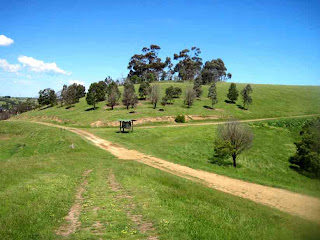 These pictures are from my Photo Hike of the Mt Lofty area, Warrandyte State Park, 30 km east of central Melbourne, on October 22, 2010.

My 3 km circuit started at the access gate on Lower Homestead Rd, then up Steven's Track to the picnic table on the Summit.

From there, it was a steep descent down the fire management track to the small beach at the Yarra.

Then, on to the River Foot-track, past the Tarzan Rope, the Lookout, along the Boardwalk to the main carpark at the Mt Lofty canoe launching ramp at the end of Lower Homestead Rd, then back to my car.

The Mt Lofty section was the last main area to be added to the Park, in 1997. At the time of European settlement in the 1830s it was covered in forest, stripped and cleared, then it became open farmland, grazing and orchards, and subsequently purchased by the Government.

The views are stupendous, over the river, across the Yarra Valley to the Yarra Ranges and to the Dandenong Ranges, with the vast Country Club Resort and Golf Course adjacent.

There's a river creature in blue shorts and a New Zealand T-shirt who appeared in some of the photos - couldn't get rid of him!

Check out my Warrandyte Pictorial Heritage Ebook for everything you need to know about Warrandyte, at http://warrandyteheritage.yolasite.com
Posted by Bob Padula at 10:01 AM