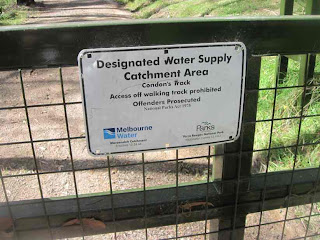 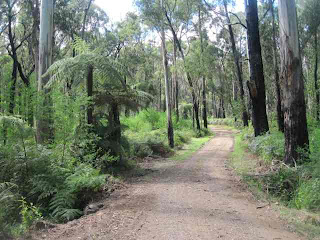 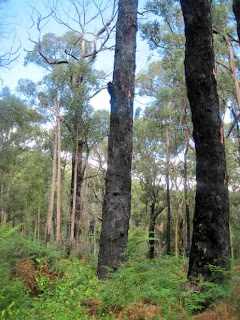 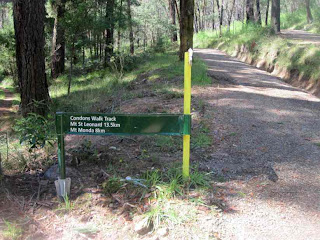 Condon's Track is an 8 km walking route in the Yarra Ranges National Park, within the Maroondah Catchment area, 60 km east of Melbourne.

It links Donnelley's Weir Rd with Monda Rd, an increase in altitude of about 800 m.

The southern section of the Track is along Melbourne Water's Road 17, one of several forest management roads in the catchment area on which walkers are permitted.

The Track goes over the "Echo Tunnel", where the Maroondah Aqueduct begins, and crosses Sawpit Creek, through old logging forest. Large stumps are along the track, with horizontal saw cuts still visible.

I walked 6 km (return) of this Track on March 11, 2011, along Road 17, starting at the junction with Donnelley's Weir Rd (116 m altitude), with a turnaround at about 385 m altitude. Here, the track deteriorates and ascends very steeply up the flank of Mt Monda, eventually reaching Monda Rd (altitude 917 m).

Ths history of the region is interesting. Construction of the Maroondah Reservoir started in 1891, and was completed in 1927. Logging was widespread in the forest until the Reservoir and Aqueducts were opened. Many of the former logging tracks were taken over by the Board of Works (now Melbourne Water), and walker access was prohibited.

Sawpit Weir was decommissioned in 1988.

In 1929, visitor facilities were built in what was known as "Condon's Gully Picnic Stop", described as "just off Condon's Gully Track", and it was said that access was by horse and coach from Healesville, "4 miles".

There are references to remains of these facilities still existing in the early 1970s, but their exact location is unknown, and possibly destroyed in fires.

The prohibited-access section of Road 17 is the original track to the Gully. East of Condon's Gully is the Meethinna Creek and Meethinna Falls. The Falls are no longer public access, with the track having been closed in the 1930s.

Images of the period 1880 to the early 1900s show the beautiful Falls, but historical references indicate that by 1915, walking access had become difficult, due to the tracks becoming overgrown by forest growth, and not being maintained. There has been no public access permitted to the Falls since about 1939.

It is not generally known that the Maroondah Reservoir was formed by damming the Watts River. Condon's Creek and Matthinna Creek formerly entered the Watts River, at the base of Mt Monda. These creeks now flow into the Reservoir.

Most of this area was destroyed in the February 2009 fires and there has been extensive regrowth. The track was reopened in late 2010.

See the Video and Slideshow
Posted by Bob Padula at 1:00 PM