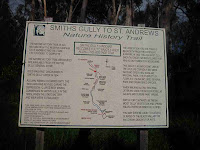 The historically important Smith's Gully to St. Andrews Gold Nature History Trail is located about 50 km northeast of Melbourne, in the District of Smith Gully, near the Kinglake National Park.

The 3 km (return) Trail starts at the Smith's Gully Reserve, on Smith's Gully Rd, opposite the historical Queenstown Cemetery, reached from the Kangaroo Ground to St. Andrew's Rd, then via Clinton's Rd. It ends at a ford at Black Cameron Rd.

It follows the Old Caledonia Gully, and newly constructed interpretative signs describe the various artifacts and features along the Trail, with fascinating explanations of how the gold was mined, using alluvial and reef extractions.

The first gold was discovered in 1854, and all mining activity was abandoned in the 1930s.
The Trail passes through an area which was devastated by bushfires in 1962 and the forest is now largely regrowth.
Remains of the stamping battery, cyanide tank, and the weir are near the car park.

I explored the Trail on Tuesday afternoon October 5, 2010 - the photos show Smith's Creek, the scenery, vegetation, forest and relics of old mining activity.

Some photos were taken in the historical Queenstown (now St. Andrews) Cemetery, directly opposite the entrance to the Trail. The first burial was in 1851 - the last in 1981. beautiful Memorial Cairn was erected near the gate in December 2009, showing the names of all who were put to rest here.

See all of the Photos, wich include images of the interpretative signs along the Trail.
Posted by Bob Padula at 7:04 AM