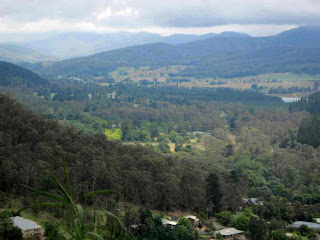 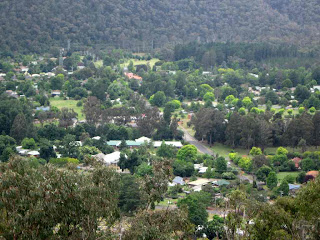 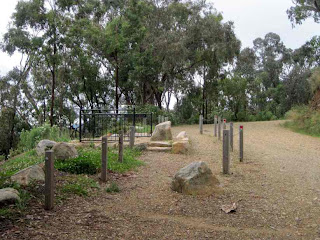 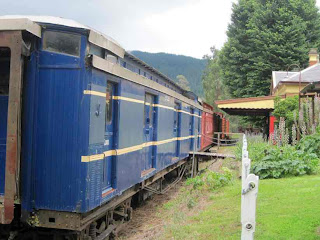 These pictures show the scenery at Bright, a town 350 km NE of Melhourne, at the hase of the Victorian Alps.

Some public-domain archival historical images have been included, as well some vintage photos taken by myself in the years 1960 to 1976!

The Bright Railway opeated from 1890 until 1992. The alignment is now a Rail-Trail. The Heritage listed station and Reserve is now a Museum, managed by the Bright and District Historical Society.

Huggins Lookout – south - walking track starts at end of Deacon Ave, or from the town up the forestry road from Baker's Gully Rd. It is at 790 m above sea level.

Apex Hill is north of the town, reached from Quinn's Gap up Mt Porepunkah Rd, and the summit is the site of the communications towers and a good lookout.

The Alpine Hotel was built in the late 1880s, and still looks much the same today! The stopping point for V-Line and other coaches is outside the hotel.

The memorial clock tower was unveiled in 1929. It is located in the town centre in Mafeking Square which was named in memory of the Boer war siege of 1899 - 1900.

Tobacco growing was phased out in 2006.

A racing car circuit existed in the late 1950s until the early 1960s, now hidden under pine plantations just east of the town area off the Great Alpine Rd - its legacy survives as Racecourse Rd.


See all of the Photos of our visit!

For comprehensive information about Bright and district, please visit

http://www.brightvictoria.com.au/?id=history
Posted by Bob Padula at 6:55 AM