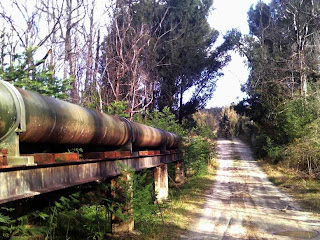 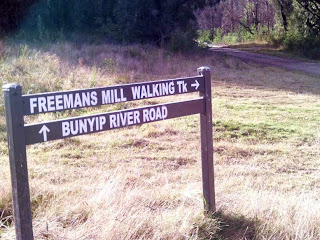 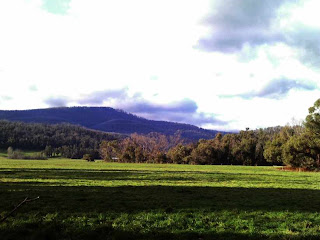 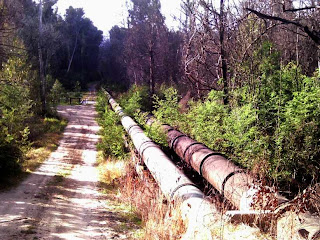 These pix were taken on June 14 2011 in the North Labertouche area, central Gippsland, 100 km east of Melbourne.

My journey started at the Monash Freeway opposite the turnoff to Bunyip, then along the Labertouche North Rd to the Bunyip River Road.

Leaving the car under the high-voltage power lines I joined the Freeman's Mill Walking Track, passing through the gate and on the newly constructed concrete bridge over the Bunyip River.

I followed the Track for about 1 km then returned.

The site of the old Mill is about 6 km further on at the disused Bunyip Weir, deep in the forest, on the slopes of the Bunyip Ridge.

Freemans Mill was established in 1911 and continued until it and the surrounding forest were destroyed by fires that swept through the area in 1926. The settlement was said to have included six four roomed houses, a similar number of huts, a store, boarding house, a school and an eight roomed cottage occupied by the Freeman family.

A timber tramway linked the Mill with the Bunyip River.

After the destruction of the mill the then State Rivers and Water Supply Commission constructed a weir at the site together with a system of open aqueducts and piped siphons to divert water from the Bunyip River to the Lysterfield Reservoir, then being built to serve the Mornington Peninsula.

The Aqueduct Track runs beside the aqueduct and provides pleasant walking on an even gradient through the regenerating forest back to the starting point at the Bunyip River.

The new concrete bridge over the Bunyip River was completed in 2010, replacing a wooden structure which was destroyed in the bushfires of 2009.

These fires also ravaged the forest around the mill area, and there has been extensive regrowth.

It had been proposed that a new long walking route be constructed from the Bunyip Weir north through the Yarra State Forest to the Seven Acre Rock reserve near Powelltown, but the 2009 fires virtually destroyed this area, on the Bunyip Ridge.
Posted by Bob Padula at 1:43 PM