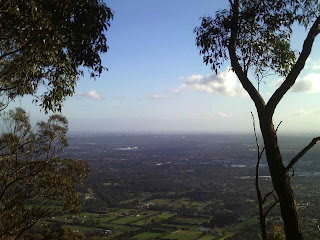 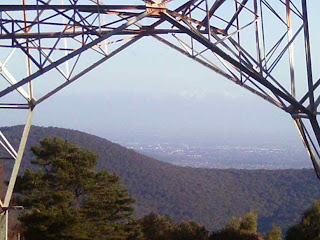 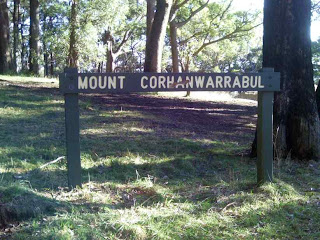 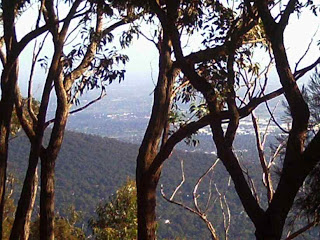 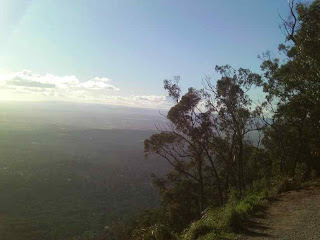 On Friday July 22 2011 I went up to the Mt Dandenong summit region.

Leaving the car at the small car park off Ridge Rd, near the Kyeema aircrash memorial, I walked along Kyeema Track to the superb open rocky viewpoint known as Burke's Lookout. This is adjacent to the ABV2, HSV7, and Channel Ten TV towers.

This was originally known as Barne's Lookout, and reamed in the 1920s, 628 metres.

From there, I continued to the Mt Corhanwarrabul Picnic area.

Then, back to the car, after a journey of about 2 km.

The panoramas from Burke's Lookout across Melbourne are excellent - the city skyline, Port Phillip Bay and the You Yangs further to the west were visible. To the north, the Macedon and Kinglake Ranges are prominent, but there was some haze.

A new memorial cairn and information board have recently been constructed near the site of the Kyeema aircrash disaster of October 1938.

The Kyema Track has been rebuilt, having been widened and surfaced with gravel, as a fire management and walking track.

The Kyema Track and Lookout is reached from a small car park just off Ridge Rd, not far from the commercial Skyhigh Observatory.

The CBD is 40 km in a direct line from the Lookout.

See all of the Photos of my visit!
Posted by Bob Padula at 10:39 AM